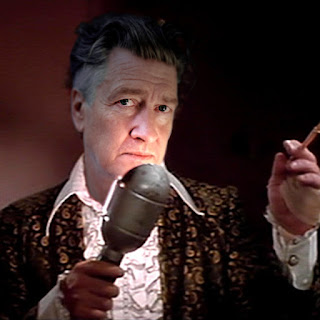 Forthcoming radio broadcast on the music of, about and around David Lynch. Airing Thursday 14 February - Valentine's Day - 7-8pm in Max Headroom on Melbourne's 3 Triple R 102.7 FM. Here's the blurb:

Since the cavernous industrial noise of Eraserhead, music has occupied a prominent place in the work of David Lynch. Blue Velvet re-imagined Roy Orbison as an echo-drenched psycho-delic operatic crooner, Twin Peaks introduced the world to Julee Cruise and created an influential version of jazz noir, Inland Empire revealed the horrors lurking amidst the massed strings of Mantovani while Lynch himself has devoted increasingly more of his energies towards pop and rock production.

Featuring music from his TV and films, by influences and influenced, and from Lynch himself, Lynchian Psychodrama presents an hour of bipolar sonic merriment. Let's Rock!

This ought to set the mood: