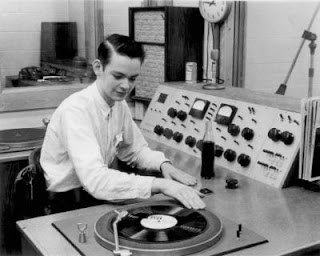 I'll be broadcasting on Triple R in the wee small hours of Tuesday 31 August from 2-6am, that's 6pm Monday 30 August for Londoners. It will be another four hours of contemporary classical, electronics and random ephemera. In particular I'll be playing extracts from Hermann Nitsch's recently released 9th Symphony - harrowing stuff, computer piano music from Conlon Nancarrow and Wolfgang Voigt, plus more hauntology, hypnagogia and psychodrama. Catch it in Melbourne 102.7FM or internationally at http://www.rrr.org.au/programs/streaming/

The next graveyard is Saturday 11 September - a big date, let's make it special.
Posted by Joshualine at 11:01 am

I am a big fan of your music show on 3rrr. I think if the right people see this comment, it is only a matter of time before you a get a regular radio show in daylight hours. Your tastes in music are both eclectic and erudite! however, i am concerned by the lack of songs about robots. Can you rectify this?

Thank you Paul for your comments, particularly about robots. I'll attempt to rectify this in the near future, with a show perhaps devoted to robots. Can you suggest some robot songs? All I can think of is Kraftwerk...

Of course, anything by Kraftwerk would be most appreciated as when they are not specifically referring robots or cyborgs in their songs, they are of course always indirectly referencing a robot lifestyle and space-metal plated, hover-car, mechanical way of viewing the world. Alternatively, you could play: "I robot" by the Alan Parsons Project, "Yoshimi Battles the Pink Robots" by The Flaming Lips or even something like "Welcome to the Machine" by Pink Floyd as I understand the machine referred to in this song is an evil robot.

Thanks again Mr McGee, consider a robot show in the bag. Will play Kraftwerk, and Yoshimi (love that song), but don't know the Alan Parsosn or Floyd songs.

Early Detroit techno is all about space, cars and robots so should have loads of songs. Got an album of italo-disco called 'I-Robot' which ought to work. So, next show = robots!

That would be super!! Can you dedicate your next radio show to my Siamese cat Toby?